It Takes a “Hero” to Remake a School’s Culture

Growing tired of having to regularly address some students’ less than responsible behavior, like constant lateness or cutting of class, staff at Valley High School in Louisville, Kentucky decided to try a new approach to behavioral modification that focused on positive conduct.

Valley used to be a Title I school but in 2016, shed the moniker of persistently low-achieving, which means placing at the bottom five percent of state exam scores. The next challenge was to control discipline problems and create a more positive culture.

The school looked to Hero K12, which is a behavior management platform to manage discipline through evidence-based methods, like positive reinforcement (research shows that negative consequences do not affect long-term behavior change) and redirecting negativity. Through incremental steps, students recognize, embrace, and build on each behavioral milestone to become more positive school citizens.

Jennie Currin, a Valley High College Access Resource Teacher and member of the school’s Positive Behavioral Interventions and Supports team, headed Hero K12’s implementation in 2016. Before they started with Hero K12, Currin said discipline challenges created an almost pervasive, toxic school environment. “We needed something positive and fun to infuse our building with.” Staff still continued to record misbehavior, but they turned the focus onto highlighting and tracking positive student actions.

The new emphasis worked: after a few months of its application, tardiness fell by 25 percent, and inappropriate cell phone use dropped by 32 percent. More students were prepared for class and ready to learn, courtesy and helpfulness increased, and the school culture became more pleasant.

Caption: The number of positive student actions recorded at Valley High increased from 3,484 in month one to 48,039 in month three after Hero K12 was implemented at the school in January 2016.

Valley targets four types of positive behaviors, which they determined from their own school priorities. Students earn Hero points each time one of those behaviors is recorded:

Students accrue points within a set timeframe, explains Currin, who then averages the totals by class. Students earning above the average are eligible for rewards that are given during scheduled sessions. Some of these rewards include:

All school staff can access Hero to record and reward excellent student behavior. Individual teachers can issue class awards. Teachers report that students are eager to win points (and always let teachers know so), and are super happy when they do. 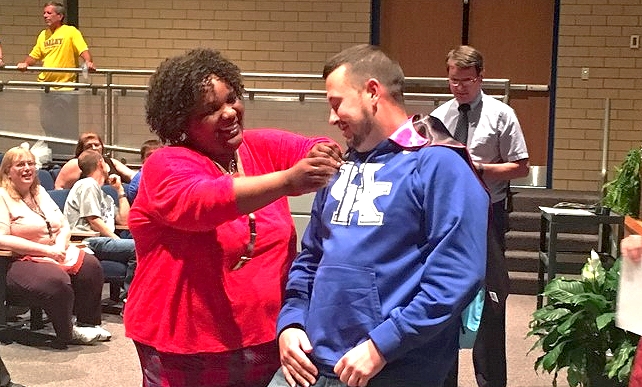 Caption: A Valley High teacher receives a cape in recognition of the school’s launch of Hero K12 to incentivize students when they show positive behaviors. In a short time period, tardiness dropped 25 percent and inappropriate cell phone use dropped 32 percent while positive actions increased 1,279 percent.

Currin says the students see the platform as a game, albeit a game that builds important life and behavioral skills — like self-awareness and conflict avoidance. Students might not appreciate this now, but will benefit from these life skills in the future.

As with any initiative, implementation required a clear plan to get teacher buy-in. Currin deftly negotiated this by giving teachers two weeks to try out the software in one of their classes. Teachers then shared their experiences during a faculty meeting. The positive comments from faculty encouraged those who were skeptical to give it a shot. Ultimately, 87 percent of Valley teachers tried the tool in their classrooms. They also launched a friendly and light-hearted faculty competition for the most points awarded.

Additionally, parents are kept in the loop about the platform through in-app notifications, social media and parent meetings so they can encourage their children’s continued good behavior outside of school.

Currin says Valley is hyped to take Hero K12 to the next level. “We want to keep that positive momentum going,” she emphasizes. “We want to see how far we can take it—and how much of a positive change we can make at our school.”

Michele Israel owns Educational Writing & Consulting and works with large and small educational, nonprofit, and media organizations to bolster products and programs. Her career spans more than 25 years in the field of education as a traditional and non-traditional instructor, professional developer, writer, and curriculum developer.

Creating a Culture of Inclusion in the ...

If You Really Want to Design Useful ...