In a world ever more dominated by screens, turning captions on can help students improve literacy.

The first time I saw closed captioning was in 1992. I was visiting a King Tut exhibit in Denver with my family. My kids were nine and 11, and my wife, a teacher, had instilled a love of reading in them. Nevertheless, TV time was still their favorite time. Seeing those words displayed across the screen as they were spoken planted the seeds that would become our Click! #captionsON: Be. Caption.Cool campaign! 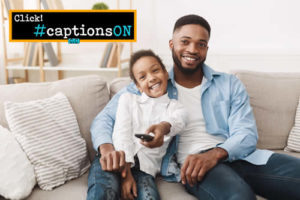 That year, with the singular goal of turning passive TV time into reading time, I launched a company that sold converter boxes that could add closed captioning to any TV. We sold a few hundred units of our “Primetime Reader”; however, our momentum was derailed in 1994 when the federal government mandated that all manufacturers needed to include closed captioning capability with every TV sold in the US.

Life went on, and it brought more screens. I worked for other people, took another company public, and started a few others.  In 2011, my wife Barb and I co-founded  Kids Read Now, a non-profit organization that provides a turnkey K-3 summer reading program for schools. The “Caption Thing” was always at the back of my mind as we lived more than ever in a digital world with laptops, cell phones, and tablets all a major part of life.  I was always captivated by a national campaign’s power to shift mindset in America – take the Buckle Up seatbelt campaign, and how ultimately it saved thousands, if not millions, of lives since its inception. The Recycling and Designated Driver campaigns also had the same positive impact on society and our planet.

As we approached the Kids Read Now milestone of gifting 1 million books to American kids, I came across an old infomercial for Primetime Reader. As I watched it, I thought about how reading rates are abysmally low now, and kids are ‘glued’ to screens. I knew Americans needed a national campaign to turn screen time into reading time and “make captions cool.” With the help of my co-founders, Caption.Cool was born! An off-shoot of our non-profit Kids Read Now, Caption.Cool is geared to 4th to 8th graders.

Facing the National Literacy Crisis
According to the Nation’s Report Card, evidence-based research indicates that only 22% of high poverty kids are proficient readers entering 4th grade.  If a student isn’t reading by 4th grade, their odds of going to jail are two in 10, and their odds of earning a college degree below 3%. They have just a 10 or 15% chance of earning more than minimum wage and a three in four chance of trouble with the law.

This year, of course, the situation is even more dire than most. Because of the COVID-related school closures that became widespread in March and have continued into this academic year, many students are stuck at the level of progress they’d made by December 2019. Many of them are not getting sufficient practice because teenagers only read books for an average of 12 minutes each day. At the same time, kids are spending an average of seven hours each day on screens.

Parents have an ongoing battle with screen time—everyone knows it’s not good for them—but they aren’t making a great deal of progress. So what can frustrated and concerned parents do?

Making Screen Time Learning Time
An easy, free, and “cool” way to make screen time into reading time is to click captions, whether on a TV, tablet, cell phone, laptop, or desktop. We need to shift the mindset that all screen time is “bad” and encourage kids to read along with captions on as they enjoy their videos and even some games.

In 30 minutes of screen time, those captions will display about 4,500 words, which is about how many the average kid reads in a day. If you extrapolate that out to the seven hours kids are spending in front of a screen, suddenly they’re reading 63,000 words (about 300 pages) within a day.

Captions naturally provide reading supports, too. As a kid is reading the word “pterodactyl,” for example, they’re also hearing it spoken aloud and probably seeing a visual example of the pterodactyl. It’s as though they have someone pointing at the words and reading along with them, while at the same time they get specific context clues about the definition of new words. And, of course, if they’re reading along with captions they’re almost certainly highly engaged because there are hundreds of channels for them to choose from.

On the Caption.Cool website, we have links to dozens of studies demonstrating the connection between closed captions and improved literacy. From India to Finland, from individual American states to the United Kingdom, researchers have found again and again that simply turning captions on helps improve students’ fluency, reading speed, comprehension, phonological awareness, sight word memorization, and overall literacy.

Making It Second Nature
Clicking captions on— every time and every screen—should be as natural as buckling a seatbelt when you get into a car. Back to my initial goal of emulating the positive national impact of the seatbelt/recycling/designated driver campaigns: each of those campaigns was successful due to strategic partnerships with community and celebrity advocates, corporations, and government.  Forging partnerships with Literacy Champions from all walks of life and business is our next critical step to launching a nationwide campaign.

At the school level, we’re offering informational kits with banners and posters, as well as stickers kids can stick on the back of TV remotes and tablets, similar to the stickers used to help people remember how to sort their recyclables. Teachers will learn more about our campaigns through an hour-long professional development to help them understand the benefits of turning captions on every time they turn on a screen.

No one is saying that kids should spend more time in front of screens any more than a seatbelt campaign encourages people to drive. But if kids are in front of screens, we should make that time as productive as possible. The best way to do that is to turn those captions on!

How to Start Homeschooling in Kentucky

How to Start Homeschooling in Louisiana