2020 Best Colleges and Universities in Washington

By Matthew Lynch
0
Spread the love

If you’re looking for a college or university in Washington, there’s a 50-50 chance that you’ll be in attendance at one of the schools in the Seattle-Tacoma area. That’s because half of the state’s institutions of higher education are in the city with the largest population.

These are the 2020 best colleges and universities in Washington – in Seattle and beyond.

Gonzaga University – At #4 among universities in the Western region, Gonzaga is also third place nationwide in undergraduate teaching. The university has a prominent school of law and is known for its legal writing program. This Roman Catholic school accepts students of all faiths, and the acceptance rate is 66%. The annual tuition and fees run $43,210.

Seattle University – Seattle University commands seventh place among similar school in the Western region of the United States. Affiliated with Jesuit philosophy, the school encourages community involvement. It is known as an excellent school for legal writing. It’s also a good choice for veterans and considered a best-value selection as well. The annual tuition and fees are approximately $44,610.

Whitworth University — Ranked at #8 among regional universities in the West, it’s also a best value choice and veteran-friendly. Whitworth integrates faith-based decision making into its academics. Tuition and fees here are approximately $43,640 per year.

University of Washington – Ranked nationally at #59 among universities, this university is known for its research as well as colleges of engineering and medicine, and it is an outstanding business school. The university’s acceptance rate is 46%. In-state tuition and fees are less than $11,517 per year.

Whitman College – This college tied for 43rd place among nationally-ranked liberal arts schools, and in addition to offering rigorous academics, the school allows students to earn credits in wilderness activities. Whitman is recognized for its undergraduate teaching, and the college is a best-value choice. The annual tuition and fees cost $51,764.

Two Washington universities tied for 44th place in the Western region of the United States: the public Central Washington University and the private Saint Martin’s University. Both schools are considered best-value choice for higher education.

University of Puget Sound – Ranked at #72 in the nation among liberal arts colleges, this school prizes creativity. Students are encouraged to take advantage of internships and to study abroad. Tuition and fees at this private school are $49,776 annually, and an education from this college is a best-value choice.

Washington state offers plenty of opportunities for earning a degree in regionally and nationally recognized colleges and universities.

Congratulations! If you represent a college or university that is included in this list, please collect your seal below. 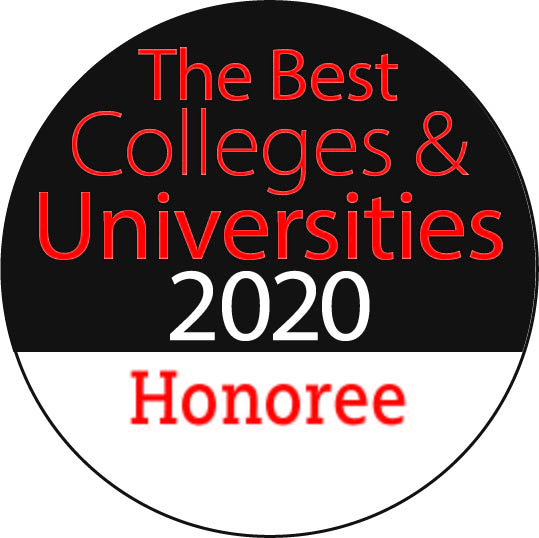 2020 Best Colleges and Universities in West ...

2020 Best Colleges and Universities in Virginia